* In case of any delay in receiving the OTP, you may verify it later. Please proceed without verification.

Enter your City name or Pincode

Hodal is a small town in Palwal district of Haryana. It is a self-sufficient village. Not much is known about the history of the town. The town is known to be mostly inhabited by Sorat Jats. It was once a part of Brij Bhoomi. Brij Bhoomi is known to be the birth place of Lord Krishna. Hodal is mainly known for Maharani Kishori Devi, first wife of Jat Raja Suraj Mal of Bharatpur. It was also the head village of 24 villages inhabited by the Sorot Jat clan. The town is famous for an ancient temple devoted to Lord Krishna . 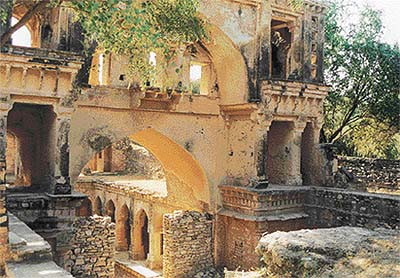 Ruins of haveli of Chaudhary Kashi Ram in Hodal

Not much is known about the ancient history of Hodal. In ancient times it was a part of Brij Bhoomi, the birthplace of Lord Krishna. In pre-Mughal era, Hodal is said to have belonged to Odes. Odes were a nomadic community who were involved in the occupation related to digging and managing the excavated earth. These Odes used to build earthen dams and kutcha ponds for kings and monarchs. It is also believed that a few Deshal Brahmin families lived with the Odes. Odes are believed to be brave and haughty community. According to the information available they used to offend their Brahmin neighbors on many occasions, which turned Brahmins vengeful. Brahmins called the Sorot Jat from Kashi Khera, near Hodal to take their revenge. The Brahmins and Jats as per their plan has invited the Odes on the eve of Divali and made them drink plenty of wine. That turned Odes in an inebriated condition which helped Jats eliminate them. The Brahmins in return had to give 15000 bighas of their land to the Sorot Jats. The three brothers of Sorot Jat clan had had settled here before the above stated incident. The eldest one Ojhoo lived with the Brahmins, the second one settled at Banchari, north of Hodal, and the youngest settled at Sondh, towards the northwest of Hodal. Hodal also shelters the Pando Ban where the Pandavas had rested and worshipped Lord Krishna during their exile.

Hodal during Mughal period has seen many ups and downs. It was later brought under the direct rule of the East India Company. The Sorot Jats despite of many hardships continued with cultivation. Kishori Devi was the daughter of one Chaudhary Kashi Ram Sorot. According to the stories Maharaja Suraj Mal of Bharatpur was once passing by Hodal on his elephant saw Kishori Devi restraining the bull that was bothering the people of town. She was a brave, stout and beautiful young girl. Suraj mal impressed by the bravery and beauty of the lady had sent the offer for marriage and finally they married around 1730. On the other side Sorot Jat clan continued to expand in Hodal.

The town was largely inhabited by the Jats and Brahmins, though there were some Muslims in Hodal before 1947. After Partition they migrated either to Pakistan or to Muslim-populated cities in India. Muslims and other communities lived cordially at Hodal. A mosque near the Shahi Baori and an idgah was built by the muslim community. These buildings does not exist today and are said to be demolished during partition.

Fifty years ago, Hodal is believed to be a big, self-sufficient village. The market was then run entirely by local baniyas. They settled here when British took over the region maintaining its peace and stability. They came here from far off places, and had built their shops-cum-residences in the mandi and old bazaar area. Today Hodal has all the civic amenities. The Municipality here was started by the Punjab Government Notification No. 1464 on September 24, 1885. It still functions from the old building located beside the old thana building.

Comments / Discussion Board - History of Hodal